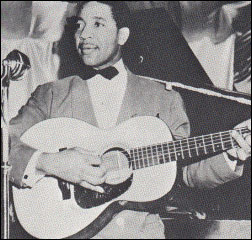 Born in New Orleans on February 8th, 1889, and one of a large and talented family, Alonzo "Lonnie" Johnson played fiddle, guitar, piano, and banjo from childhood. He joined his father's band at 14 and began playing in cafes in New Orleans. In 1917 he traveled in Europe playing in revues. When he returned home to New Orleans in 1918, he discovered that his entire family had been killed by a flu epidemic except for one brother. He and his surviving brother, James "Steady Roll" Johnson, moved to St. Louis in 1920 where Lonnie played with Charlie Creath's Jazz-O-Maniacs and with Fate Marable in their Mississippi riverboat bands.
"I played every excursion boat out there for five years!" - Lonnie Johnson

Johnson won a Blues talent contest in St. Louis in 1925, which earned him a seven-year contract with Okeh Records. His command of a number of instruments and unending stream of Blues themes made him an ideal recording artist. His facile and accomplished guitar technique and sweet-toned voice were combined with a Louisiana vibrato and an urbane and disarming delivery. He was in great demand as a soloist and sideman in the recording studio and in performance. Throughout the rest of the 1920s he recorded with a variety of bands and major Jazz giants of his day, including Eddie Lang, Louis Armstrong and his Hot Five, the Duke Ellington Orchestra, Johnny Dodds, and Jimmy Noone, cutting some 130 sides before the Great Depression set in. His hits like "Falling Rain Blues" and "Mr. Johnson's Blues" would inspire future Blues legends like T-Bone Walker and B.B. King who would echo his guitar riffs decades later.

Lonnie Johnson's reputation was so strong and influential that a young Robert Johnson, while playing with Johnny Shines, would sometimes introduce himself as "one of the Johnson boys, like Lonnie...," to boost his credibility to the audience.

Johnson continued to play for the rest of his life, but was often forced to leave the music business for periods to make a living. In 1963 he once again appeared briefly with Duke Ellington. He probably had a longer active career than any other blues singer, and continued to perform and record up until his death in 1970.

Lonnie had a truly monumental effect on the Blues. He was the first artist to use his guitar as a crying counterpart to lyrical accompaniment, today a mainstay in blues tradition mimicked by greats from B.B. King to Stevie Ray Vaughn. Johnson was also a key figure in the introduction of the guitar to the Blues. Previous to Johnson's work, the fiddle and banjo were standard instruments to African-American nineteenth century music, and the guitar Lonnie helped to popularize, was not well known.

Lonnie Johnson was one of the first generation of Blues artists to make recordings, many of which reflected jazz and stage traditions. Johnson was the cream of the Blues talent of his day, and is still known for his smooth and polished music, which sharply contrasted with the sound of the more prominent Country Blues singers of his era.