Tweet
I was blessed to have known the great blues artist, Charles Brown, as a friend and mentor. Charles lived three blocks away from me in Berkeley, CA. He kindly agreed to play on my first album, "Everyday Living," recorded in 1986. We also performed together a number of times.

While on tour in the Midwest to perform at the Mississippi Valley Blues Festival in Davenport, IA, we took a pleasant evening off to indulge in one of Charles' favorite pastimes Ã¯Â¿Â½ going to the racetrack and betting on the horses. We had a great time going over the racing form together, comparing our bets, and just chatting in between harness races at East Moline Downs in Illinois.

I had been asking him about some of his influences and the great performers/musicians he had seen and shared the stage with. I asked him who he thought was the best performer he had ever seen. "Hawkeye," he said, "one of the greatest performers I ever saw was Big Maybelle. She was fantastic! Do you know, she cried REAL TEARS in every performance!"

I had heard of Big Maybelle, and have her recordings, but I had never seen her perform. (Mabel Louise "Big Maybelle" Smith, 5/1/24, Jackson, TN - d. 1/23/72, Cleveland, OH.) Charles' eyes lit up as he described her wonderful voice, stage presence, use of dynamics, and the ever present handkerchief she used to dry her tears while singing.

I asked Charles if he had ever seen Bessie Smith perform. He told me his mother had taken him to 'hear' Bessie Smith perform live, but he did not 'see' her. I asked how that could be, "You heard her, but didn't see her?" His response was extremely enlightening about the nature of early 20th Century entertainment and the power of the artists who performed then, especially Bessie Smith.

Charles told me that his mother took him by car from their home in Texas City, TX. "I was just a boy, not even ten years old. We drove to an open field on a farm a couple of hours' drive away. We parked in the open field along with many other folks. There was a big tent set up in the open field, and that's where Bessie Smith was going to perform. Some of the people were heading for the tent and paying the admission and getting their seats, but a huge portion of the folks just sat in their cars and on their horse-drawn wagons and waited for the show to begin."

"You didn't have to pay to hear Bessie Smith if you didn't want to because PA/sound systems were not yet in common use. Entertainers in vaudeville and in tent shows worked without such sound reinforcement, as they always had. Bessie Smith had such a powerful voice and her vocal projection abilities were so great that all you had to do is sit out in the field in the area of the 'tent show' and you could hear everything for free. So, yes I heard Bessie Smith sing live Ã¯Â¿Â½ she was marvelous, but I never saw her."

Just imagine, Bessie, and all of these great musical artists, performing for hundreds of people without the benefit of a mic and PA system. That adds a new level of understanding regarding the 'power' of these early entertainers. Whether in a roadhouse juke joint for 30 people, or in a huge tent show for hundreds of people with a full band, there was no sound system. And that applied to most all of the artists of the early 20th Century. Singers and musicians had only their own abilities and skills to be able to project power and dynamics before the advent of sound reinforcement systems and microphones.

This was true even amongst early 'pop' artists, as well. It is said that when Al Jolson, the famous (non) "Jazz Singer" of the 1920s, sang in a large theater you could put the palm of your hand against the back wall way behind the audience, and feel it vibrate as he sang. He did this without the advantage of a public address system and microphone. 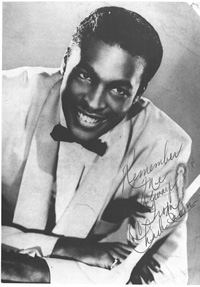 Charles' description of "hearing, but not seeing," Bessie Smith opened my mind to an aspect of a long past era that is well documented. But what we know is only through the siftings of ashes, through the archives of recordings and photos of the past, and not so much by enlightening firsthand accounts that present us with a deeper perspective on the life and times of music performance in the early part of the 20th Century. That story about Bessie Smith from Charles Brown gave me a whole new understanding and appreciation for those early performers. Imagine a time when EVERYONE had to have a power and skill of projection, dynamics, and BALANCE in order to be heard. You might get an idea of this when you listen to the recordings of prewar music by Charley Patton, Bessie Smith, Ma Rainey, Tommy Johnson, and the rest. But Charles Brown's story brought the concept to the forefront for me, that it was a prominent aspect in the ability of any entertainer to succeed as a performer in those times, whether on a street corner, in a juke joint, a tent show, or a vaudeville stage.

I gained a new appreciation for all of those early artists, as a result. The musicians and the audience, paid and unpaid, front row, back row, or way out in an open field far away from the stage, could hear every note without any kind of sound reinforcement. Truly, another time.

While driving back to our hotel from the racetrack, I asked Charles what his thoughts were on the development of West Coast Blues, of which he was an integral part. At that time, I had been playing in the Oakland/San Francisco blues scene for almost 20 years. I had seen, heard, and performed with many of those who had helped shape West Coast Blues, and as a result, I knew quite a bit about the history of the music, but I wanted to hear it from one of the founders of the genre.

Without hesitation, Charles enthusiastically responded to my question. "Well, Hawkeye, before World War II, down in the Southland in Mississippi, Alabama, Louisiana, Texas, etc., Black folks were singing blues songs on topics like "Big Legged Woman (Keep Your Dresses Down)," and such. But during World War II many of these folks had migrated to urban areas of the West Coast: Los Angeles, San Francisco/Oakland/Richmond, California, and Portland and Seattle. They relocated to the West Coast because of the availability of work in the defense industry seaports, like in the Kaiser shipyards in Richmond, California."

"These transplanted blues-loving Southern folks became more sophisticated as a result of living in the more fast-paced cosmopolitan urban settings of the West Coast. They still loved and wanted to hear blues music, but while we were playing and performing for them in clubs on the West Coast after the war, they were now talking fashion." (I'll never forget Charles using that phrase, "Talking fashion.") "Life and times had changed for our audience. The more base subject matters of typical conversations in Southern juke joints during the prewar years had shifted to folks talking fashion."

"So in response to the fact that our blues-loving audience was now more urbane and 'talking fashion' in clubs and on the street here on the West Coast, we created a kind of blues music that reflected this change in social consciousness and lifestyle. Our listeners were more sophisticated. In response to this, we musicians, too, became more sophisticated in our approach to the blues we created and played for them. We introduced extended/altered chords, a variety of smooth, slow, and fast jump rhythms, and our lyrics reflected what was going on in our new found urban lives on the West Coast. What we played was ALMOST jazz."

Charles Brown was a gentleman, kind, intelligent, humorous, and was true blues royalty. I learned about life and music from him. I hope these insights he shared with me also opens some doors of 'blues understanding' for each of you.