Tweet
Introduction
Have you ever been in a situation when the scale used to play a solo just won’t work throughout the track? If so, you probably faced what is called a modulation: the change of keys in the same musical piece. This dreaded situation can be approached several ways. This guide will give you simple tools to sound melodic while respecting the different scales of the song.

If you are like 99% of guitar players, you will probably start your lead with the first position of A minor pentatonic scale as follow.

When comes time to use the second key, you might be tempted to use the same shape, shifting your hand to the new area of the fretboard as seen below.

Playing with the previous positions will work. However, because both shapes are found on different areas of the fretboard your ideas might sound a little detached from each other. Your lead will have a jumping type of feel when shifting from one area of the fretboard to the other. Although this is not necessarily something bad, it might not be the most interesting phrasing you could play...

To avoid that jumping effect, let’s try to fit both scales into the same area of the fretboard. Doing so will help us focus on common notes and sound more focused. This will also help us start an idea in one key and finish it in the other without sounding like we shift around on the fretboard too much.

About Scale Positions
Before figuring out which scales to use, let’s talk a little bit about scale positions.

As you know, it is possible on the guitar to play the same exact note on different places.

Let’s take for example a C note. That C note can be played in all the following places on your instrument:

In the same way, it is possible to play the same series of notes found in a scale all over the fretboard.

Let’s now map our fretboard with the five notes of our scale anytime it can be played on the fretboard:

Because of the multiple notes found, such a scale would be quite difficult to memorize. We’ll fix the problem by dividing that scale into equal sections that we will call positions.

In this particular case, we will divide our fretboard into five equal sections. Each section will start with one of the notes of the minor pentatonic scale. Because these five positions are all extracted from the same scale, the player may use either one at his own taste to improvise.

This shows that it is not necessary to start the scale you are using to improvise from its root. It is however quite useful to be aware of where that root is within the used position.

We’ll call the first position the one that starts with its root on the 6th string, 5th fret as follows. 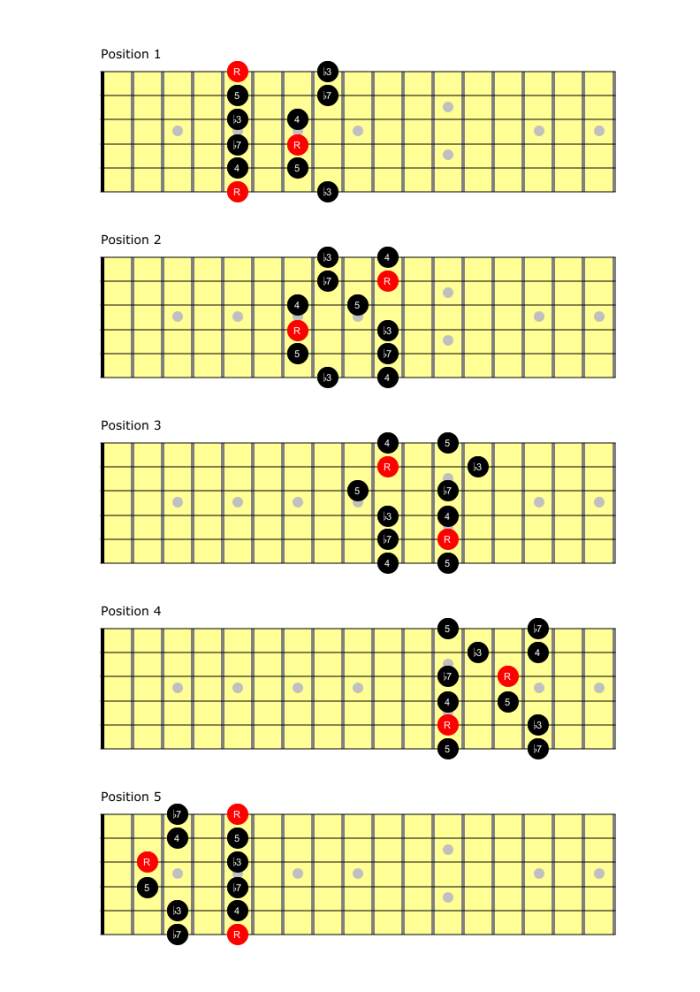 Being aware of this will help us avoid the jumping effect we discussed earlier.

Avoiding the Jumping Effect
Let’s go back to our example in which we need to play over a backing track that starts in A minor pentatonic and modulates to D minor pentatonic.

For this, we need to determine which position to start with. There aren’t any rules as to which position will be better. Let’s keep things easy and use the first position. As you can see, that position takes place between the fifth and the eighth fret:

To find this, we first need to find all the D notes within that area. Because of the way the guitar is built, it will always be possible to find any desired note within the area of the fretboard you are working with.

Here they are listed below:

All we need to do now is to find a minor pentatonic position that has its root on the 5th string and 3rd string (as indicated by the D notes above) and that takes place between frets 5 and 8. Going through the following shapes will show us that only the fourth position fits.

The fourth position is the one we are looking for because its root is on the 5th fret, and it takes place between the 5th and 8th fret.

You might be tempted to use the 3rd position as its root is also found on the 5th string. However that position will not be a wise choice as it is organized in such a way that it moves towards the left side of that root. This will take you in a lower area of the fretboard that the one determined by the first scale.

Modulating with Modes
The previous section talked used simple pentatonic scales. In the same way it is possible to use more complex scales using seven note scales. The biggest challenge when using seen note scales is to be well aware of all the available positions.

To facilitate the process, remember that most modes are built on the pentatonic scales. All you need to know is the nature of the mode (minor pr Major) and its formula:

Exercises
Let’s now put to practice what we have learned. In the following exercises, we’ll use the minor and Major pentatonic scales.

The starting position will be given to you. Depending on where that position is played on the fretboard, you will need to determine which positions to use for the other keys.