Tweet
The term ii V I is heard a lot, particularly in the Jazz idiom. However, the ii V I is seen in all types of music but may not be used as explicitly. In this article I want to really explore various ways of improvising through this chord progression.

There are different approaches to improvising, such as - scalar, arpeggio, linear, angular etc. It is important as an improviser to develop as many approaches as possible, so as to have more choices available to us in the heat of the moment. Learning licks and whole solos are both great steps to take when trying to become a fluent improviser.

I first want to clear a few things up. ii V I refers to the roman numerals of the root movement in the chord progression. For Example in the key of C Major, "I" is C, "ii" is Dm, "iii" is Em etc. You must also pay attention to the case that the roman numerals are written in. For example an upper case "I" indicates that the "I" chord is a Major chord type where as a lower case "i" indicates it is a minor chord type.

ii V I are generally placed in 2 categories (although there are variants):

The common misconception is that the minor ii V i is called minor because the "i" chord is minor - this isn't necessarily the case. It is a minor chord because it belongs to a minor key and in minor keys, the "ii" chord is a half diminished (m7b5), whereas in a major key the ii chord is just a straight minor 7 chord. Therefore, the "ii" chord is what gives us the indication as to whether it's a minor or major progression.

Now the theory stuff is out of the way, I want to present you with various ii V I licks.

The first selections include major ii V I licks which are of a linear nature, mixing a scalar and arpeggio approach. In terms of contour, they are a mixture of fairly linear (smooth) and angular (jump around).

Ex1: The first lick incorporates enclosure chromaticism for the first 4 8th notes and then pretty much follows each chords related mode - I have chosen Bb Dorian for bar 1, Eb Super Locrian for bar 2 and implied Ab Lydian in bar 3 (even though I don't play it, that would be my choice for that bar).

Ex2: This lick makes use of some of the arpeggios that are hidden within each parent scale.

Ex3:This Lick jumps around a fair bit but is a lot of fun to play. Listen out for that #11 in bar 3.

Ex4:This lick makes use of Eb Phrygian Major in the second bar, this is an alternative to Eb Super Locrian which we have used in the other licks.

Ex5: Here is the first of our minor ii V i licks. This one incorporates a more angular approach using 6th intervals mainly. 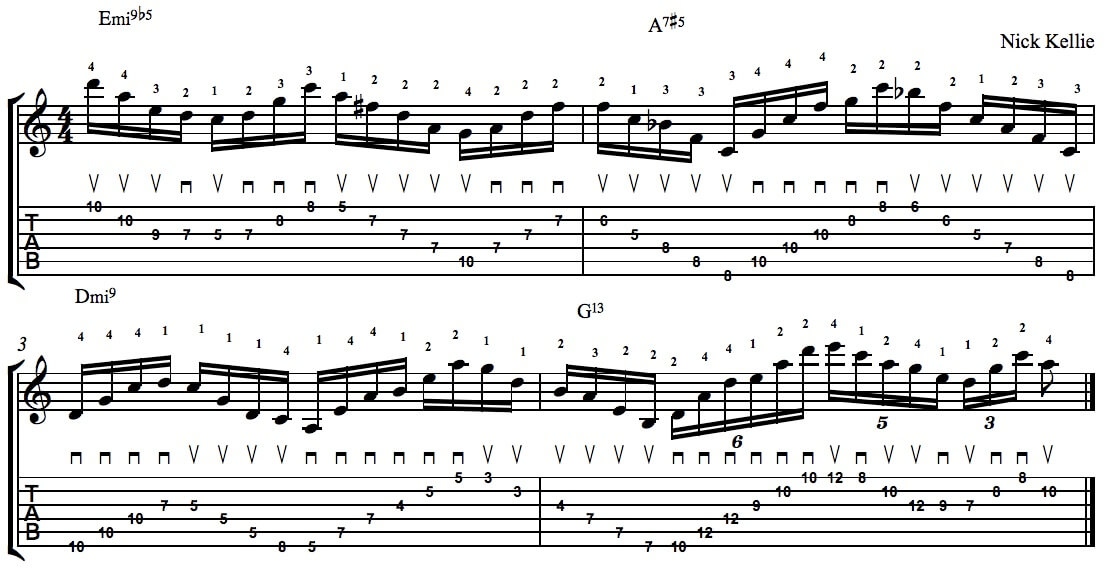 I really hope you have enjoyed these licks. They can be difficult but are well worth the practice. This is Nick Kellie signing off. Stay tuned for more articles, lessons and live Q&A sessions.