Tweet
Chords and the guitar often give people headaches both in terms of memorization and in terms of physical difficulty. In this lesson I want to look at how you can go about creating a whole host of chords quickly and effectively.

Chord playing is something that most good jazz pianists really have down well. Due to the logical nature of the piano's notes spanning from left to right, this is made considerably easier. However, due to the dimensions of the guitar, notes not only go from left to right, but also north to south!

It is essential as a guitarist that we learn our scales, not only in shapes but also as one scale that covers the entire fret-board.

When one looks at a scale you tend to see its use for single notes only. This couldn't be further from the truth! It is also possible to stack the notes of a scale to make chords. Remember, a chord is many single notes played together at a time!

Instead of looking at a scale one note at a time, try viewing it on 2 or 3 strings. We must become masters of viewing many notes through a scale at once. Take this for example: 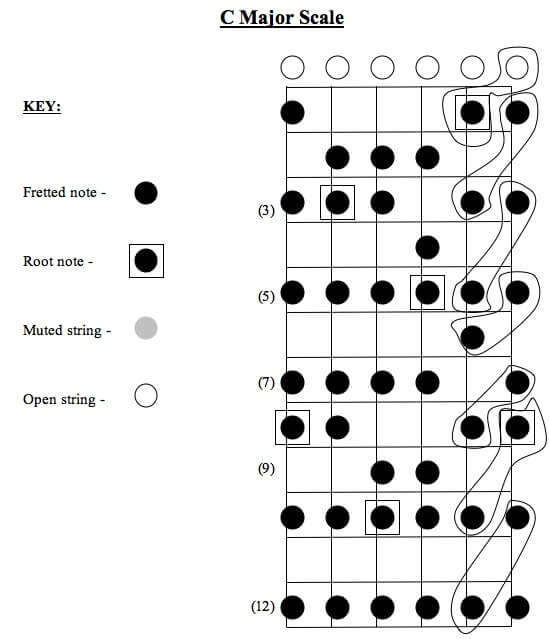 Here you can see I have outlined two note grouping on the top two stings of the guitar (e + b). The scale shown is C major. Therefore, if we were to play these examples they would fit into that key and work over its related chords for example: c, dmin, emin, fmaj, g7, am7, bm7b5, not forgetting all their extensions cmaj9, dm11, em7 fmaj9#11, f/g, am11, f/b etc. When one does this we are utilizing the sounds of the keys related "modes".

You can see here that we have only used 2 string examples, but it is possible to stack as many notes as desired, but remember to rely on your ears! 6 notes together do not always work well on the guitar (both physically and aurally)!

These chords are really excellent to use for soloing, that's right, soloing with chords, much like a piano player would do. They also work well on static vamps that need some harmonic variation. For example, the next time you have to comp over a G7 chord, try using the chords we looked at today (don't forget to transpose to G Mixolydian).

In the following examples I have taken the blues (in A) and from each chord of the blues (A7, D7 and E7) I have built a whole host of chords from each chords related mixolydian mode (A Mix, D Mix, E Mix) and stacked notes over the D, G and B strings altering them to fit the scale shape as they move along the strings.

Below is each scale for the blues progression, you can see that I have outlined the chords in each. I suggest you learn each scales chords separately to begin with and then later practice the chords over their home roots e.g. A for A Mixolydian. 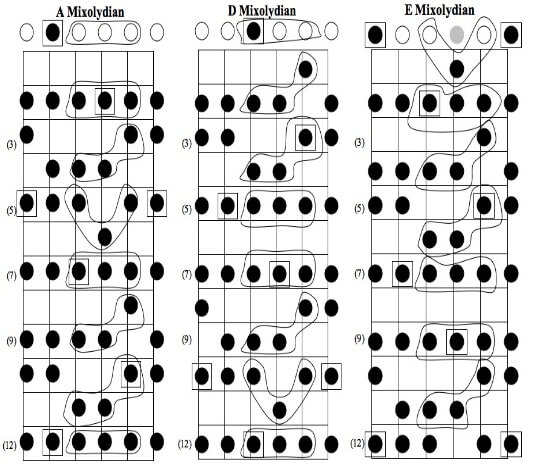 Now it's time for a few examples to cement this concept in your mind.

Example 1
Here are the chords derived from A Mixolydian scale which are to go over the A7 chord, starting from the lowest possible chord in the scale on those 3 strings.

Example 2
Here are the chords derived from D Mixolydian scale which are to go over the D7 chord, starting from the lowest possible chord in the scale on those 3 strings.

Example 3
Here are the chords derived from E Mixolydian scale which are to go over the E7 chord, starting from the lowest possible chord in the scale on those 3 strings.

Example 4
Here is a sample piece of how they could be used in the context of a 12 bar blues progression. 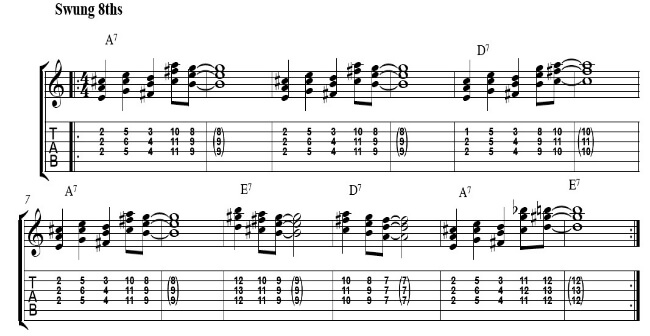 Be sure to come up with your own pieces, this is more like a set vamp to use over the blues as an alternative to the typical riff based blues us guitarists are so used to (and sick of playing). Remember, once you have learned the chords well, you can freely improvise using them and remember to be inventive with rhythm.

Please be sure to experiment, and also remember, when experimenting with the modes of the major scale that chords that sound good over c major aren't going to sound the same over E minor for example, but, as your ear develops you will get used to and appreciate the sound.