Tweet
The Importance of Hearing
As a musician, it is important to develop a good ear in order play what you want. This guide should give you some good practical ways to improve your skills. Keep in mind that developing a good ear takes time and requires daily practice. It will require patience and dedication, but will truly help your life as a musician and music appreciation in general if you spend the time.

Perfect Pitch and Relative Pitch
Perfect pitch is the ability to name or reproduce a pitch without any need to a reference note. Someone with perfect pitch will be able for example to name the pitch of the sound of a doorbell ring. This ability is not very common but can be learned with proper training. Perfect pitch does have great benefits when it comes to transcribing melodies on the spot, but also comes with its share of disadvantages. It is very hard for someone with that ability to enjoy music as all the notes heard will be analyzed by the listener.

Relative pitch is in my opinion preferable. Relative pitch is the ability to hear a desired note in reference to another. This skill is primordial in order to sing or play a song correctly. It is also used to harmonize, transpose or reproduce a melody by ear without the need of reading a score. Because relative pitch is so much more practical and accessible than perfect pitch, we'll concentrate our efforts in developing an excellent relative pitch ear in this guide.

A Word About Intervals
A note played by itself does not have much meaning. The sound of the note heard might be interesting depending on which instrument generates it, but it does not usually bring much emotion to the listener. A note becomes meaningful if it is heard in relation to another note. The distance between these two notes is called "interval."

The unit of measure used to measure these intervals is called "step." The smallest distance between two notes found in western music is a half step (1 fret on the guitar). 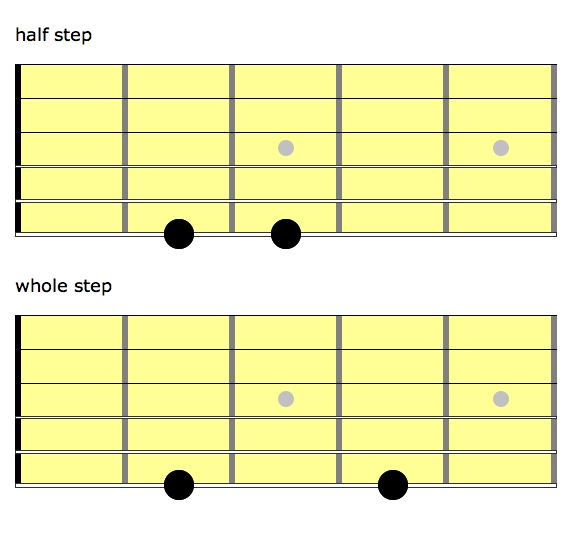 The reference note used to measure the intervals is called the root. That root can be placed anywhere on the fretboard. All the following notes will be measured in reference to that root note.

The widest interval we will work with in this guide is called an octave. The octave determines the distance between two notes of the same name. Being able to hear intervals wider than octaves is useful, but we will focus on the smaller intervals first as this will have an immediate impact on your music.

There are seven different note names found in western music as follow: A B C D E F G. These seven notes are placed within an octave.

The distance between two consecutive notes is called a second. By skipping a note we get a third. We can continue naming these intervals in the same manner up to the seventh (the eighth being the octave which is the same note as the first note).

These seven intervals are placed within an octave. This brings up a problem as we need to place seven intervals between an octave which is made of twelve half steps. In order to solve this problem, each interval will have sub-categories. Some can be major or minor, others can be perfect, diminished or augmented.

Major and Minor Intervals
A minor interval is smaller than a major interval. Both are separated by a half step.
The following intervals can be major or minor:

-the second
-the third
-the sixth
-the seventh

In other words, if you hear someone talking about the major fourth, assume that he does not really know what he is talking about. Take some time to remember which intervals can be major or minor, this will save you time in the future and help you communicate more effectively with fellow musicians.

The following intervals can be perfect, diminished or augmented:

-the fourth
-the fifth

Make sure you remember that the fourth and fifth can be perfect, diminished or augmented. There is no such thing as a major fourth. Remembering this is quite important, it will help you in many aspects of your playing.

Fretboard Placement
Let's list all of the possible intervals we discussed previously:

That list gives us 15 different intervals. That causes another problem as we discussed earlier that there are twelve half steps in an octave. How can we fit 15 intervals on twelve frets?

The answer to this question is found in enharmonic notes. An enharmonic note is a note or interval that is equivalent to another. Simply put, some of the intervals listed above will sound exactly like others.

Let's take a look at how these intervals are laid out:

As seen in the previous layout, here are the enharmonic notes found:

Training Your Ears
Have you ever been in a situation when you had to sing a song with your friends on the spot? You might tell me that you are not a singer, but I am sure that you sang "Happy Birthday" before, right? Even if you cannot sing it perfectly in pitch, if someone hums the first few notes of that tune you will recognize it, right? Well, if that's the case your ears can easily recognize intervals. If not, then you could not differentiate the "Happy Birthday" song from Mrs Spears "Oops I Did It Again..." My point is that your ears already hear intervals, almost anyone can hear them.

We've defined all our intervals, now comes time to train our ears to recognize them and name them accordingly. This is where relative pitch comes handy. Let's discuss a simple technique that you can use to teach yourself how to recognize these intervals on the spot. We will use song recognition for that. Basically, the idea is to associate a song you are familiar with each intervals.

Seconds: Minor, Major
Minor 2nd
The minor second is the smallest interval found in western music. It has a middle eastern type of sound. Used in any scales to add a little tension and eastern flavor.

Major 2nd
The major second is a stable interval found in many scales. It is made of a whole step (2 frets).

Thirds: Minor, Major Minor 3rd
The minor third is the note that makes a chord or scale minor. It has a mellow feel to it and is used in all the minor scales.

Major 3rd
The major third is the note that makes a chord or scale major. It has a happy sound and is used in all the major scales.

Augmented 4th
The augmented fourth, also known as the tritone is an interesting interval that tends to open up whichever scale or chord it is used in. It will add a nice atmospheric flavor to the song you use it in.

First two notes of: The Simpsons, Maria (West Side Story).

Perfect 5th
The perfect fifth is a very strong interval. It sounds very stable and adds more strength to the chord it is used with.

Sixth: Minor, Major
Minor 6th
The minor sixth is mostly used in minor scales. Whenever used in a major scale system, it will give the scale an exotic sound.

First two notes of: The Entertainer, Go Down Moses.

Major 6th
The major sixth is used in both minor and major scales. It is a very useful interval used in many different musical genres.

First two notes of: NBC Theme, My Bonnie Lies Over the Ocean.

Seventh: Minor, Major
Minor 7th
The minor seventh is equally used in minor and major settings. It is found a whole step underneath the octave (two frets down).

First two notes of: Superman theme, Cast Your Fears to the Wind.

Octave
As mentioned before, the octave is the same exact note than the root only played higher on the fretboard.

Going Further
In order to find wider intervals than the octave, simply take one of the previous intervals mentioned and add an octave to it.

Conclusion
Hearing intervals requires focused practice and is a very personal thing. Some of the song suggestions listed above are only meant as an illustration to explain the process of hearing these intervals.

I strongly recommend that you take the time to find your own examples from the songs you know. A great way to start is simply to take a song you can sing on your own without your instrument and find which interval it relates to. Doing so will make these intervals more real to you.

After training your ears for a while, you will start to recognize these intervals and be able to hear them in your head without the need of having your instrument. This will drastically help your playing and understanding of what you are playing.

Don't get discouraged if you can't recognize intervals right away. The process is gradual and will happen overtime. Don't give up and remember that your ears are the a very important element of your ability to play.