Tweet
Brian Setzer is most remembered for fronting the popular rockabilly band, Stray Cats. Although only born on April 10, 1959, his guitar playing has a real nostalgic feel to it, making use of such effects as tape echo machines, most often associated with the sounds of the late 50's and early 60's. Setzer has a raw and biting sound achieved by running a Gretsch hollow bodied guitar into a loud driven fender tube amp and shows great knowledge of harmony in his playing, often making use of diminished 7th chords, and dominant 9 chords to name just two. There is a lot to be taken from Brian's playing technically, as we see in the following examples, there are techniques such as pull offs, double stop pull offs and string bending. I strongly suggest you use these licks not only as a technical exercise but also apply them to other scales and modes.

Lick Breakdown
Lick 1 - This fist lick is based around B7 and E7 chords. It makes use of double stops, hammering on to the major third. This is a common device in blues as well as rockabilly and gives a real sense of resolution over the chord.

Lick 2 - Here we see the use of double stopped pull-offs around the Blues scale. These are not easy and take some getting used to. Be sure that you get the notes to sound clearly and experiment with various fingerings. 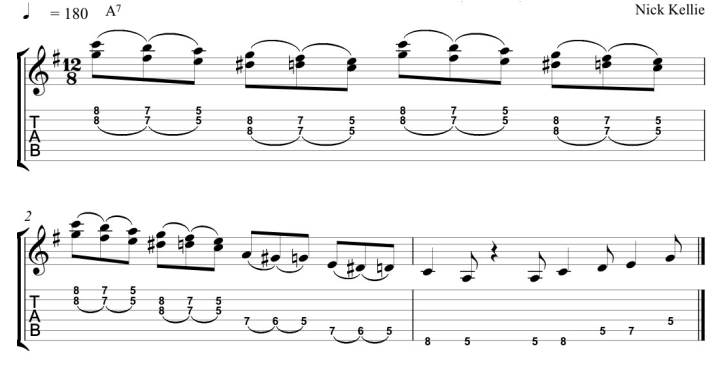 Lick 3 - This example is a rhythm guitar example that makes use of dominant 9 chords. This is an interesting example that shows chords don't always have their root as the lowest note. In this case the root is on the 1st string.