I have been a fan of Fender electric guitars as long as I can remember. Even a couple hundred bucks goes a long way with a Fender, and each model has their own unmistakable, unique tone. Earlier this year, the American Special Telecaster was released and around the same time, Fender slashed their prices on almost all their guitars. As a result, it is now possible to get into an American Tele for right around $800! Did Fender cut corners, or cheapen their guitar lines to make up for the apparent bargain? Are we missing something? After spending about a week with the American Special, I don’t think we’re missing anything. Instead, an even broader community of guitarists will experience the joys of playing and owning an American Tele.

The Fender Telecaster is among one of the first mass-produced solid body electric guitars (the first ones hitting the market as early as 1949), and there have been some technology improvements over the years, as well as a nice variety of options and flavors to take advantage of if the money is there. While some consider the Tele to be a "Country" or Nashville instrument, this guitar has made its way into almost every style of music from jazz, to funk, to hard rock. Artists such as Blink 182, Underoath, Soundgarden, Rage Against the Machine, the Beatles, and Led Zeppelin are among the thousands of major acts to sport a Tele. In fact, the classic "Stairway to Heaven" solo performed by Led Zeppelin’s Jimmy Page was originally played on a Tele.

So what makes the American Special so special? What is Fender offering for this price range that some of the more inexpensive Telecasters lack? What do players gain by stepping up to the next price range for an American Standard, or even a Deluxe model? Is this a good "main" guitar for most styles of music? These questions and more shall be answered as you read on... 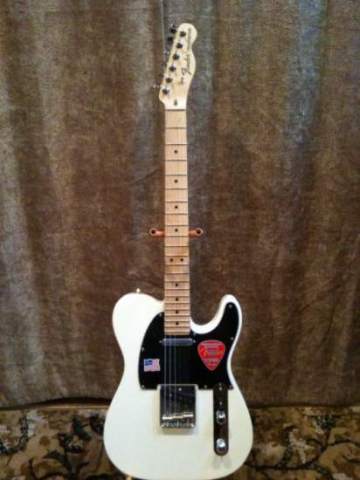 The exact model tested was the "Olympic White." It’s a nice, classic, unassuming, understated look, and is fairly genre ambiguous. The Alder body allows for good tonal resonance without being too heavy, and the Maple fretboard provides for clarity and crispness. These things are standard or at least among the options for all Teles (and tons of other guitars in general for that matter). Lets look at some of the unique features.

The American Special features Texas Special pickups, which are single coil and "over-wound." This means they have a slightly higher output and are capable of beefier sounds than a standard single coil pickup. In all positions, this thing is capable of crisp cleans, and dirty, yet tight overdriven sounds. Using a distorted amp sound, and rolling off the main volume control provides for that classic Tele chime sound. The bridge pickup with everything at "10" creates a very nice blow your hair back tone. By contrast, the Standard Tele ($500 avg. street price) has lower output single coils, and the American Standard offers "American Standard Tele" single coils. While there is a clear output difference between the Standard Tele and the Texas Specials, there not a huge difference between the American Standard ($1050 avg. st.) sound and that of the American Special. The Special seems to have a little more of a mid boost. A huge difference is noticed when stepping up to the American Deluxe model ($1600 avg. st.) where Noiseless N3 Tele pickups are used. The Texas Specials performed well under high gain situations, but they were accompanied by a fair amount of hum (which is standard for an over-wound single coil). The N3s offer that same classic throaty Tele sound, and hold their ground very well with high gain sounds and are nearly silent when they need to be. They are also the smoothest sounding of all the Tele configurations.

The American Special features a Vintage Tele bridge with 3 brass saddles. This really is of fairly little consequence when considering the overall playability and feel of the guitar, and it definitely lends it self to that classic look. Having spent time with this guitar, a ’52 reissue Tele, and an American Deluxe, it seems like a bridge with 6 independent saddles (1 for each string) is easier to intonate. I’m not sure that its a coincidence that I fool with the intonation on the ’52 which as the same bridge as the American Special a lot more than I do the Deluxe. It is certainly not a deal-breaker, just something to be aware of. 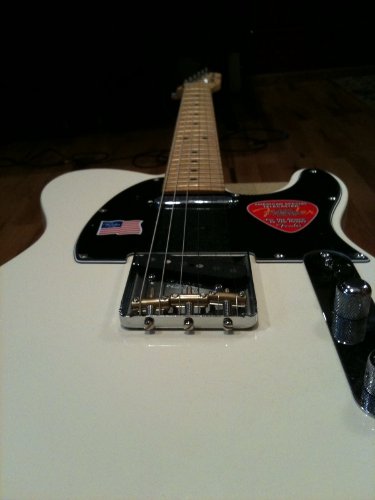 The American Special is the only model boasting the "Greasebucket" tone circuit which is a unique tone knob that attenuates the high frequencies without messing with the low end. A conventional tone knob boosts low end while cutting high end. This often leads to unwanted mud and thus, most tone knobs are never touched. Not so with the Greasebucket. With the tone knob at 0 or 10, the overall response of the guitar with the amp is pretty much the same.

The upper end Tele’s (American Standard and Deluxe) ditch the Greasebucket for a special "no-load" tone knob. From "1" to "9," the knob works like any other tone knob, but when it is all the way up, it is completely removed from the circuit. This allows for higher output of the pickups and prevents any high end from being ’left out’ when the tone knob is all the way up.

The Deluxe throws in one more enhancement. The S-1 Switching system provides for one additional pickup/tonal variation by adding a button on the top of the volume knob. When not depressed, the middle pickup selector position offers a parallel configuration, which means that both pickups are combined at a reduced output before going out your guitar jack. When the button is pressed down, the two pickups are operating in series and are therefore at full output. Other Tele models only have the parallel wiring, so the Deluxe gives players a 4th, higher output sound.

Neck (or fretboard) Radius is often overlooked when choosing a guitar - largely because it is not well understood, but it can have a profound impact on playing style and technique. The American Special features a neck radius is 9.5". How the actual measurement is done is quite confusing but the thing to remember is this: The lower the number, the more curved the fretboard is from low E to hi E, and the higher the number, the more flat or straight it is. If you were to look at the guitar from the headstock down towards the body, you’d likely see the curve like this:

How does this affect the playability of a guitar? The more curved the fretboard, the more comfortable chord/rhythm playing can be (especially barre chords), but string bending, especially with small frets, can lead to "fretting out" (notes killed by the string hitting the fretboard in another location besides the fret being played). Flatter necks are also considered to be generally "faster" or more aggressive. Older Teles have a radius of 7.5". Gibson Les Pauls’s have a flatter 12" radius, and the Ibanez Wizard Neck has a neck radius of 17". If you’ve ever tried to play standard barre chords on a traditional nylon string guitar, you are experiencing the humbling feeling of chording on a nearly flat neck radius.

Nearly all Telecasters manufactured today are based on a 9.5" radius, but the Deluxe features a compound radius. This means that down towards the headstock, the radius measurement is at 9.5" and the higher up on the neck, the flatter the fretboard gets. At its 22nd fret, the Deluxe neck has a radius of 14".

This is where the main difference in playability becomes evident. The compound radius is really the perfect solution for the rhythm player/lead player down on the neck, while still providing that more aggressive feel when playing soulful bends or fast leads up on the neck. This is also where many players who don’t have this in mind when playing a guitar wonder why certain models feel so different from each other even though the guitars are like-branded and look virtually the same.

With all this in mind, the American Special still has an even and tight feel when playing in all areas of the neck. Unlike the lower cost Standard Tele, you get a full 22 frets so you can cover a full two octaves per string with a whole step bend on the last fret.

Now lets do a little listening! The following track is a montage of a number of different styles in a full band setting so as to demonstrate how the tonal versatility fits in to a complete mix. In each section, there is a rhythm and a lead part backed by bass and drums.

Section 2 is kind of a funky groove. The rhythm was played with the middle pickup position and the lead was played on the bridge pickup. You can hear the difference in ’bite’ between the leads of the first and second sections. All knobs were turned all the way up for this section.

Section 3 demonstrates how the American Special handles moderately higher amounts of gain. With the amp loud enough, nice singing feedback comes naturally and there is a throaty aggression and midrange boost that can really be heard with the Texas Specials. The lead lines are smooth and carry a lot of definition. The sustain isn’t half bad either. All parts were played on the bridge pickup position with knobs at 10. Section 4 features more laid back feel and shows what overdrive tones sound like on the bridge and neck positions. The lead was played on the neck position. It has a glassy chime to it even with the overdrive. The rhythm has that "it sounds clean even though its overdriven" tone. Telecasters are really good at giving the sound some guts while still letting each string ring through and have their own space. Section 5 shows the Tele in a more aggressive setting. It is not hard to see from this example why bands like Rage Against the Machine would use a Tele. The fast rhythm line was played twice --one panned for each side of the stereo spectrum. One side is played in the middle pickup position with the tone knob all the way up. The other is played on the bridge position with the tone knob rolled back about 40%. The ’lead’ in the center of the spectrum is played on the neck pickup with all knobs up all the way. As you can tell from the demonstrations, this guitar has a lot of sounds and fits nicely into quite a few genres. At around $800, it is one of the best guitars I’ve played for the money and at $300 more than the more entry-level Standard it offers a nicer feel and some great enhancements like the Texas Special pickups and the full 22 fret neck. For another $250, you could get in to an American Standard and get the no-load tone knob, some different (although not necessarily better sounding) pickups and a greater variety in finishes and wood types. The jump to the Deluxe requires a doubling in price and while the compound neck radius, extra tonal possibilities and the noiseless pickups are all very cool, you’ll pay for all of it! If you’re looking for a versatile step up from your beginner guitar, or want to expand your tonal variety without draining your savings, The American Special might just be worth trying out!