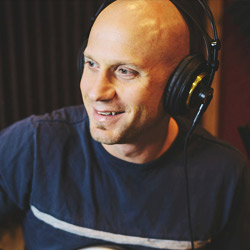 I think if we’re all honest with ourselves as guitar players, the answer to the above question is always “yes” to some degree. You wake up in the middle of the night with an idea for a riff on the brain. Maybe you saw or heard something another guitar player was doing and you wanted to try and play something like it. The perfect way you hear the music between your ears doesn’t always sound right when you sit down and try to work it out on the guitar.

I’ve said it before myself and I’ve heard many guitar players say the same thing: “I can play my guitar okay, but I can’t play the music that’s in my head”.

Now, this is a huge issue! I’m not about to suggest that I have some magic solution or that reading this edition of Weekend Warrior and practicing over the weekend is going to result in some ground-breaking way to carbon copy the music in your head and force it out your fingers. I am instead going to share some perspective on how to deal with this nagging problem, and…I’m going to extend to you an invitation. Believe it or not, the steps you take as a player this weekend because of this information may indeed change your guitar playing forever!

It’s Not About Technique… It’s About Getting Past Technique!

No musician with a long lasting impact is purely technical. As listeners, we are ultimately captivated by emotion, delivery and what some may say is the “soul” of the music. In good music, technique always takes a back seat to musical value. BUT, the artist has to get to a certain point with their proficiency before the technique is able to assume its rightful place in the back seat. Good, clean, brisk alternate picking could be a means to building to a fantastic high note at the end of an emotional 16 bars, but if the picked run is messed up, that end note doesn’t mean much. Many players take on the mindset of “Ok then, I’m just going to shut myself in my closet and do mindless pseudo-chromatic alternate picking exercises for 27 hours per day until I can get this right.”

I’ve been there. It doesn’t work. You might get faster, but something is lost when you put that much energy towards technique alone. Don’t allow yourself to be distracted! Remember what your motivation for bettering your technique was in the first place. You wanted to play the music in your head. You wanted to be musical!

Do you remember that angelic note you were working towards on your ascending alternate picking run? Make THAT note part of your practicing. Don’t separate your technique practicing from your musical intentions. Always keep them together. When you do this, there is an unexplainable acceleration that happens with your technical ability because your goals are clearly marked. You might just need to make things a bit more tangible before you tackle the whole run or passage.

Write Your Own Practice Licks!

Write a very short lick that can be expanded in to your bigger picture idea. Start small, focus on that, for even 5 minutes at a time and then work those smaller ideas in to something you never could have played if you would have just started with the whole thing in the first place.

Say you want to work on bends. Write a short lick with a bend or two in it and practice the tar out of it. Play it over the blues, play it over 4 different backing tracks. With the musical technique practicing approach, you wind up with not only better playing, but nice lick you can use later. You get to win twice! Do you want to be better at fingerpicking? Learn a short passage from a song you like that incorporates what you want to get better at, then take an even shorter part out of it and make it your own. Put your own creative spin on it.

You’ll Be Surprised At How Fast You Improve!

We all start with music as the first priority. If you can keep from getting derailed and focus on music the whole time you’re woodshedding, you’ll be amazed at how quickly you start seeing results. A great way to keep track of your progress is to record yourself and listen back at incremental points during your journey. Are you trying to create a guitar solo for a friends song. Record your initial ideas, then do a “Save As…” and work out the real deal. Record the real solo over a period of a few weeks if time allows. Compose it in your mind. Break it down in to small manageable chunks to practice and perfect. Keep the big picture and end goal in mind.

First, check out this GREAT lesson from Dave Weiner on “The Technical Side Of Playing” He provides concrete examples and starting points for this concept of musical practicing.

The Technical Side of Playing by Dave Weiner

In this very informative lesson Dave shows what to practice, how to practice technique, and his own personal practice routine.